For my English Leistungskurs class I had to read this novel in connection with the topic utopia/distopia and modern technologies, and it turned out to build up an awareness for not only the use of techology but also the responsible reflection of the age we are living in. Of course I wanted to wirite a review about it, but due to the fact that we had to read the English version of the book, I decided to also wirte my review in English: 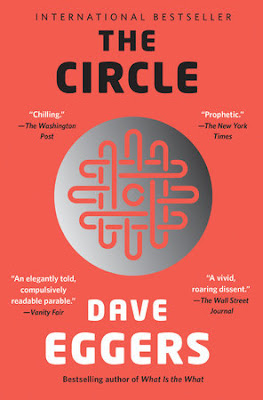 Dave Eggers founded the "McSweeney's", an independent publishing house based in San Francisco. He has already written seven previous books, including "A Hologram for the King", wich reached the final round for the National Book Award in 2012, "Zeitoun", which is the winner of the American Book Award and the Dayton Literary Peace Prize, and "What is the What", which was a finalist for the 2006 National Book Critics Circle Award and won the France's Prix Médicis.

One company, one aim, and the power over society. A society, where people are no longer diginfied in their privacy, individuality or interests. People are trackable, capable and overall seethrough. The internet has developed into a tangeled web with unlimited possibilities to explore, analyse and explain the world. But customers can only use its benefits if they accept the shadows:
Mae is a young woman in her twenties, full of dreams, hopes and depression in her old job and odd hometown. Through her best friend Annie, one of the top fourty members of the company, she gets a position at the most improtant instrument of the internet, the connector of modern life, the Circle. She is overwhelmed by the magnitude, significance and power of the company, that soon developes into her home, social life, and place to be - just like it intends to be for it's employees. "Humans work here" is one of the most important divises for the more than 10.000 Circlers, who are supposed to be be bound as close as possible to the company to assimilate the philosophy, world outlook and not scrutinise any of their propositions. It is a ingenious brainwash-system, Mae gets throgh and soon develops into one of the most important instruments of the coorprate management, the most influencial rank for the world outside the Circle. When she arrives at the company, she works her way up from the customer experience to the prototype of a transparent human. She releases all of her privacy and with the camera chain around her neck she shows millions of people everyday how the Circle improves the standart of living in the technological world it creates. Work becomes essential for her, she is captured by the company, and gets deeper and deeper into the idea of an idealistic utopia, where humans have no right of their privancy, can be found wherever they hide and regulate politics with their direct opinion. The Circle is about to engross everyone in it's system, and to invent a total new ethik - the way of life in the technological age - where sharing is mandatory, socialising is obligation. No one can escape the eyes of the Circle and it's supporters, and one of Mae's closest friends rather dies than beeing a bolt of the unstoppable machine. Even when she gets the chance to stop the instrument, she has lost any awareness of what the dangerous changes in human life will lead to. She is one of the Circle's captains and maneuvers the armada into a regime of a totalitarian monopoly. Dave Eggers creates a fourious and shocking realistic version of a distopia, closer to our reality than we would ever want it to be.

A company that regulates most of our online activity? - could be Google. A socialising system where participation is duty? - our dependency from what’s app and facebook. A health care system where the personal data is watched improved and is always available for everyone? - smartwatches. A tracking system to follow everyone to any place, to get rid of privacy? - GPS data that get stored from our smartphone without us even knowing it. The scenario Eggers thinks of seems to me as a further developed version of our society. In the Circle company, politics is ran over the enterprise, politicians are set under pressure to get transparent because of their responsibility for the voters. Can it even get more absurd? Of course we are far away from that today, but Eggers wants us to think about how dependent we have already made ourselves on technology, companies and virtual communication. It is an irresistible maelstrom of more and more inventions to realise the three dogmas of the wise men, the founders of the company: 'Secrets are lies, sharing is caring and privacy is theft.' Through cameras all over the planet and chips in human bodies the world is supposed to be made visible, see-through and capable. Mae and most users of the Circle services got rid of any criticism and even ability for realistic evaluations and only consider the increase of living standard it goes along with. Don't we know this behaviour ourselves? We download an app without being aware of the interferences in our personal data. In some points we are already building up a society like it is depicted in the book. Still, we are probably way to enlighted to let our policy get ruled by an internet enterprise, hopefully. Dave Eggers' book could be the novel of our age, a more realistic continuation of "Brave New World" and "1984", but surely it is an important warning to everyone that takes the internet for self-evident. He illustrates the consequences of a jaunty use of modern technology by creating an intensive, shocking realistic portrait of human behaviour - a warning we should take serious.

Please leave your feedback in the comments below, and subscribe to my blog if you want to!